It’s been a funny old month really. I had a 2nd checkup last week, a bit cursory really – just a feel around by neck and chin(s). No lumps that shouldn’t be there, but really I’m waiting for September’s scan, so that I’ll have a proper answer on my status.

This scan will be head to foot (more or less) and the objectives are twofold: first to check on Larry the lump in my throat and second – more importantly, to see if there’s any spread,

So that’s just a waiting game.

I still have to smile at the irony of my medics insistence that I don’t lose any weight – and we almost got into an argument at last weeks checkup, because they say I’m losing too much weight – too fast. I must admit, they may have a point.

It’s a bit of a difficult one – I’m pushing myself to eat and am certainly doing better than a few weeks ago, but the actuality is I can’t eat much of anything. Mostly because I still have very little sense of taste. But also, because of almost mon-existent saliva production, it’s difficult to eat without drinking some water with every mouthful of food, else it won’t go down. So I don’t have much appetite for anything and waste a fair bit of food, because I rarely finish anything.

I did decide to cut down on my reliance of Peggy the feeding tube. And now I can see that set me back – a combination of low-calorie intake, some dehydration and cutting down on morphine, left me feeling pretty poorly for a few days.

Hey ho! Back to doing what I should and amazingly, I feel better. Until the next time.

Also in this last month was my 65th birthday. That should have been ‘retirement’ day and I’d have been a pensioner. What an awful thought 😉

Yeah, for Wozzer this was a milestone to become more active. Or should that be simply, active? Anyway – what better than a cycle ride in the nearby Forest of Dean. There are a number of trails and bike hire there – downhill mountain biking looked a bit iffy for me, so we settled on the 10 miles Family Trail.

I mean, how hard can that be?

Actually, I hadn’t been on a cycle since 2009 when I was volunteering in Siem Reap, Cambodia. I used to cycle around 3 km each way to the project. 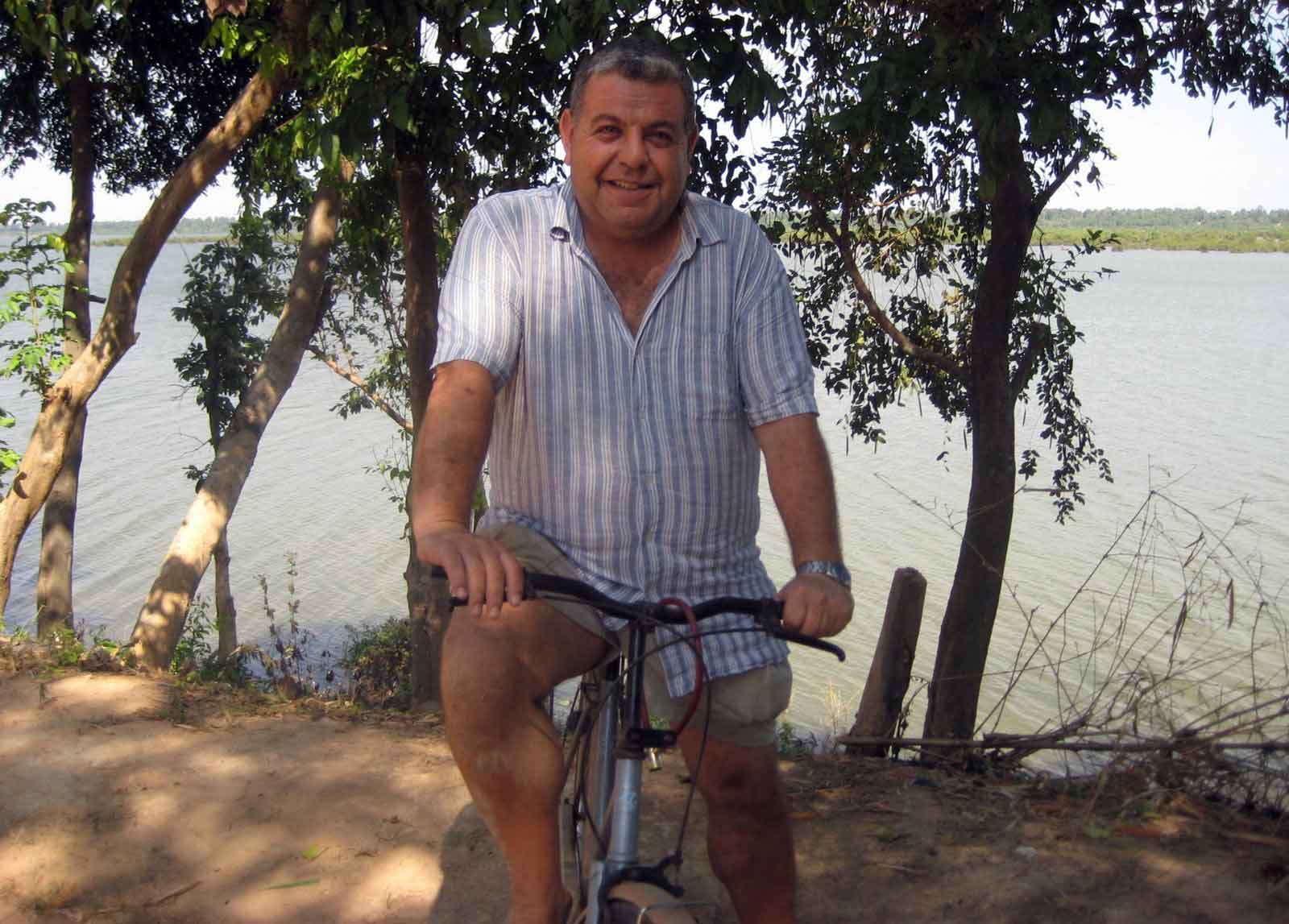 It was murder every day – not only all the locals (especially the kids), ranging from staring agog to outright pissing themselves with laughter at the sight of Wozzer perched on a rickety bike. But also the 30-35 deg C heat and humidity had me puffing and dripping with sweat. And that was just getting on the bloody thing!

It took a little while of leaving it unlocked at night, but finally thankfully – someone stole it. And I swore then it would be my last time on a bike.

Shame my memory failed me when I most needed it…

Back to present days… We started off well – for the first 50 yards anyway. Then it was a rocky downhill section. Better that I got off and pushed. 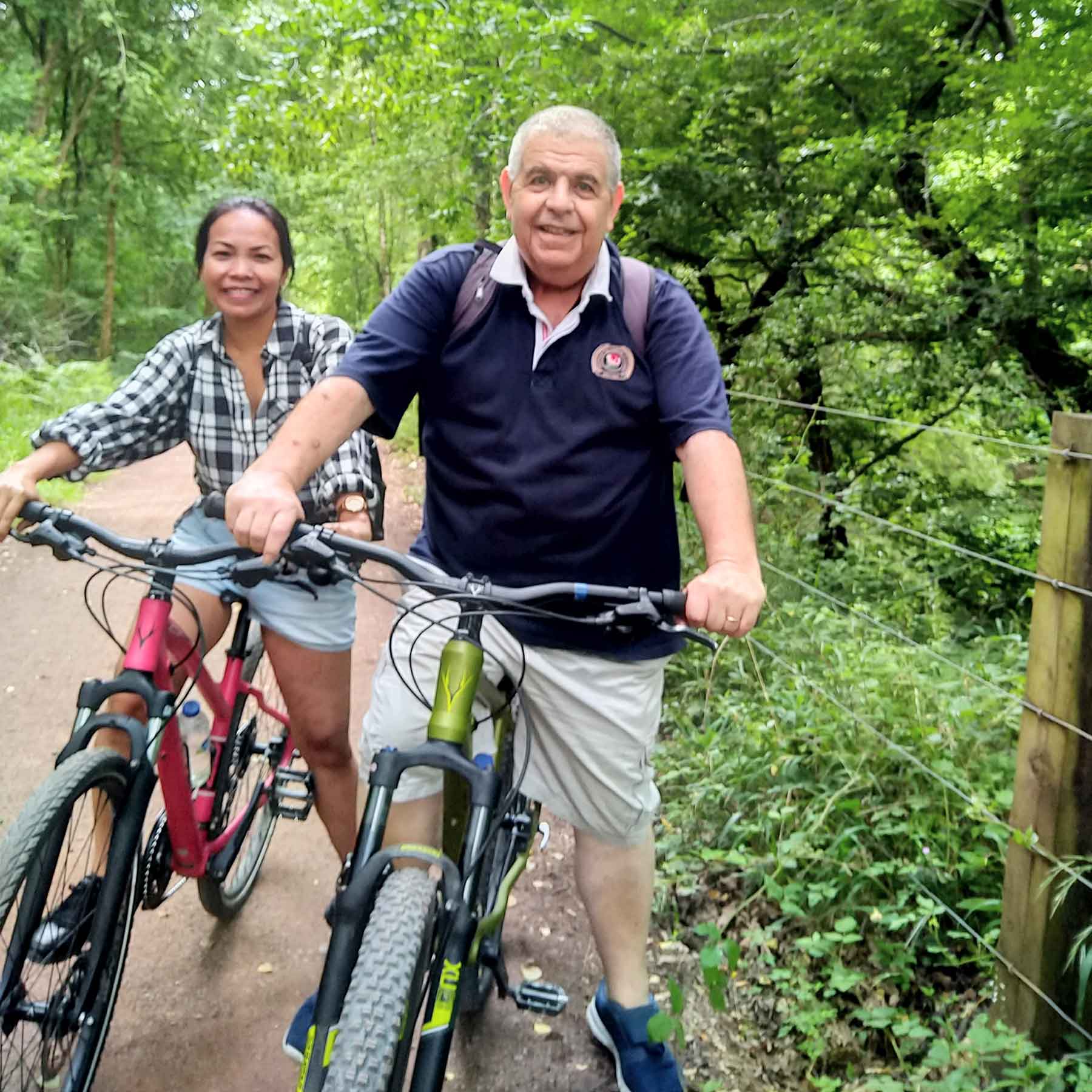 On to a long steady upward incline (on an old railway route), which was nice – but interspersed with me not having much stamina, meant a few brief stops  - we got some great-looking family shots here.

But – what goes up must come down. I mean – you have to try picture this…

All 115kg of Wozzer , hurtling downhill on a well-oiled mountain bike. We were in a line – Nisa up front, me in the middle and Samros at the rear.

Then we weren’t in a line.

I hit a rocky section on a bend, pulled the brakes too hard and ended up tumbling off the track and rolling about 20 feet down a ditch. Oh boy, that hurt a bit – I did bang myself up on a few rocks and even worse, slid through what must have been the local nettle farm.

Nisa stopped cycling when she heard Samsos’ scream. She turned round and noticing one missing and asked ‘where’s dad’?’

She got her answer when looking down in the same direction as her mum. And there I was, lying face down, bike on top of me and trying to say “ I’m okay, just trying a short cut”.

The real pity was they were both too shocked to get a photo of me, in that prone position.

So that kind of cut short my birthday trip – but in fairness, it was a memorable day! 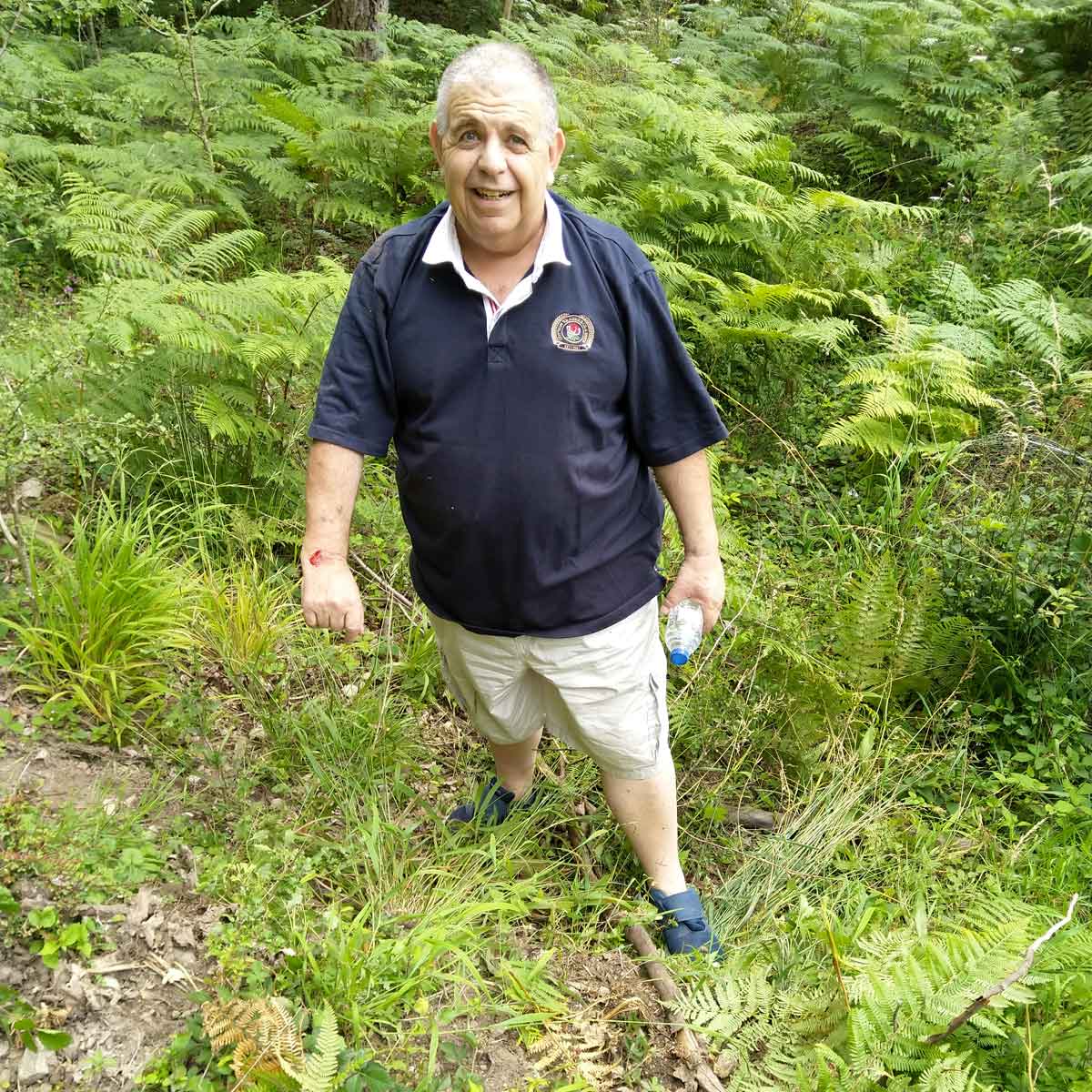 Also, I’ve done a bit more planning for the ‘World’s Biggest Coffee Morning’ in aid of Macmillan Cancer Support, on 25th September 2020. I’m hoping to chit chat with friends, colleagues and family around the world – so I’ll be hosting the video ‘meetings’ for 12 hours (7am to 7pm UK time).

This should allow coffee mornings in the US, coffee afternoons in the UK and Europe and Beer O’Clock for those in the Far East and down under. Hopefully you’ll all fine some time to get online with me – even if only for a few minutes. Donate the cost of a coffee or two and we’ll be eternally grateful. It all counts and all donations are going to a great cause.

I’m using Zoom Video Meetings. It will work on all devices (Windows, Apple, Android etc), it's FREE to use and can be downloaded in advance by clicking here

If you don’t install in advance, no worries – when you click the invite link that I’ll send next month – it will download and install on whichever device you use. Just say yes to the permissions it requests (use audio, video etc) and you’ll be good to go in just a few minutes.

Until then, stay safe and well 😊