Looking back through this blog, I’ve started a few by saying ‘it’s been a funny old …’

This month, I should start by writing ‘it hasn’t been funny at all…’

Well, at least even I’m struggling to find anything funny about the latest news following last month's scan. To cut a short story even shorter, I’m not out of the woods yet.

And unlikely to be.

This upshot is that so far the treatment for my throat cancer has worked well - and in fairness, physically I’m doing quite good right now. Even my sense of taste is improving marginally. And my swallowing of food is also going the right way - so to speak.

So it was pretty devastating to learn some more cancer terms, which I was aware of - but hoped wouldn’t apply to me. Because I now have secondary (or metastatic) cancer.

The scan shows two tumours developing on my right lung and one on my sternum (breastbone). Secondary cancers are named from the primary site (in my case throat) and in my case are officially metastatic throat cancer of the lung and breastbone.

It’s early days yet in terms of any proper prognosis but generally, secondaries are not normally curable. They’re treated as they develop, with chemotherapy or radiotherapy (or both), or not at all, depending on how things go.

Dr Warren Grant was of course open to all the questions I could think of and I know there’s no bullshit in his answers. So I know right now no treatment is planned - at least if nothing changes, until my next PET/CT scan in January 2021. I don’t have any pain and the tumors are not particularly large (approximately 7mm to 13mm).

So the judgement is to monitor me over the next few months and then make a further decision in January.

I was shown the last scan and talked through it. I have to say, it was pretty amazing to see a 3D computer image of my insides, traveling virtually from my feet up, as though I was laying down on my back. A number of my organs were seen (thank goodness) and the tumors are also highlighted by the ‘contrast fluid’ that I described previously. The PET bit of the scan.

I should also say that this isn’t an exact science like say, mathematics. The doctors have to make the best interpretation and judgements of the computer images that they see. But the tumors are there and even if small with no pain, it’s a huge disappointment mentally right now.

If there is some upside - and I have been digging deep to find any, at least I have some more material for my blog going forward 😉

On a lighter note...

I received a number of emails about my anecdotal story of the Haloween fancy dress sketch in 2010 and it’s given me the idea to recount some further notable (or forgettable) episodes that only Wozzer could get up to mischief in.

So here’s a quick story about Wozzer on the frontline, doing his best to destroy a temporary ceasefire between warring Cambodian and Thai troops, back in September 2010.

For a bit of background, there’s a piece of land on the Thai / Cambodia border, near the magnificent Khmer temple of Preah Vihear in northern Cambodia. The two countries have been arguing about the land nearby for a hundred years or so. Fighting flared up in 2008 and lasted on and off around three and a half years.
There's more detail here: https://en.wikipedia.org/wiki/Cambodian%E2%80%93Thai_border_dispute 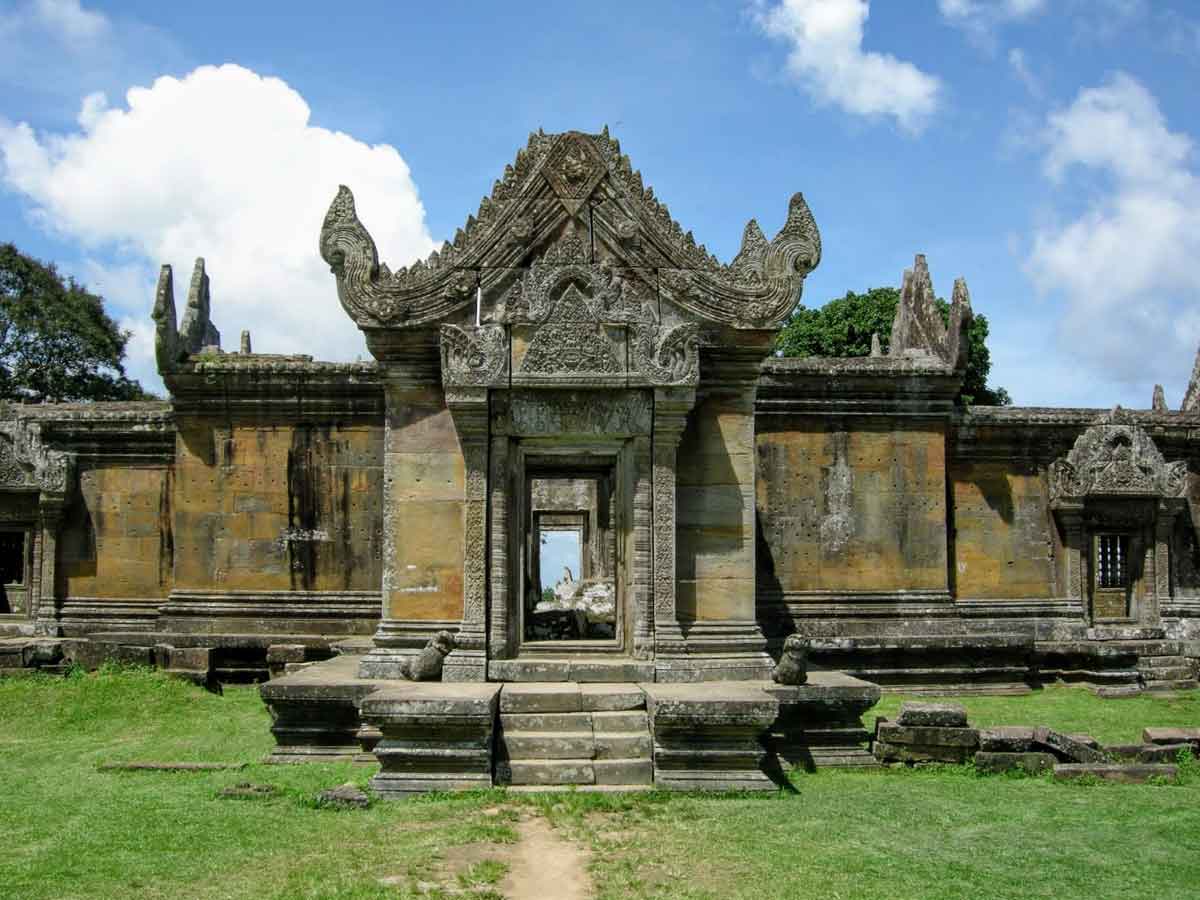 Preah Vihear Temple, on the Cambodia / Thai border. Perched on top of a cliff, over 500m up in the Dangrek Mountains

It wouldn’t have been a big issue in world affairs, except that the fighting coincided with Wozzers arrival in Cambodia. My having diplomacy skills lower than say Idi Amin didn’t help matters when I went up to the battle zone during a lull in the fighting.

Actually that’s not totally accurate. I was quite happy being 100 miles or so from the fighting.

But when the author of ‘Rough Guides for Cambodia’ made contact with the tour company I was working for, and requested logistics to visit so she could research first-hand how safe (or not) for the latest revision of the book, it did seem an opportunity not to be missed by yours truly.

So off we set with Beverly, Luna, Ta (our chief guide) and myself as driver for the day in the company Landcriuser. 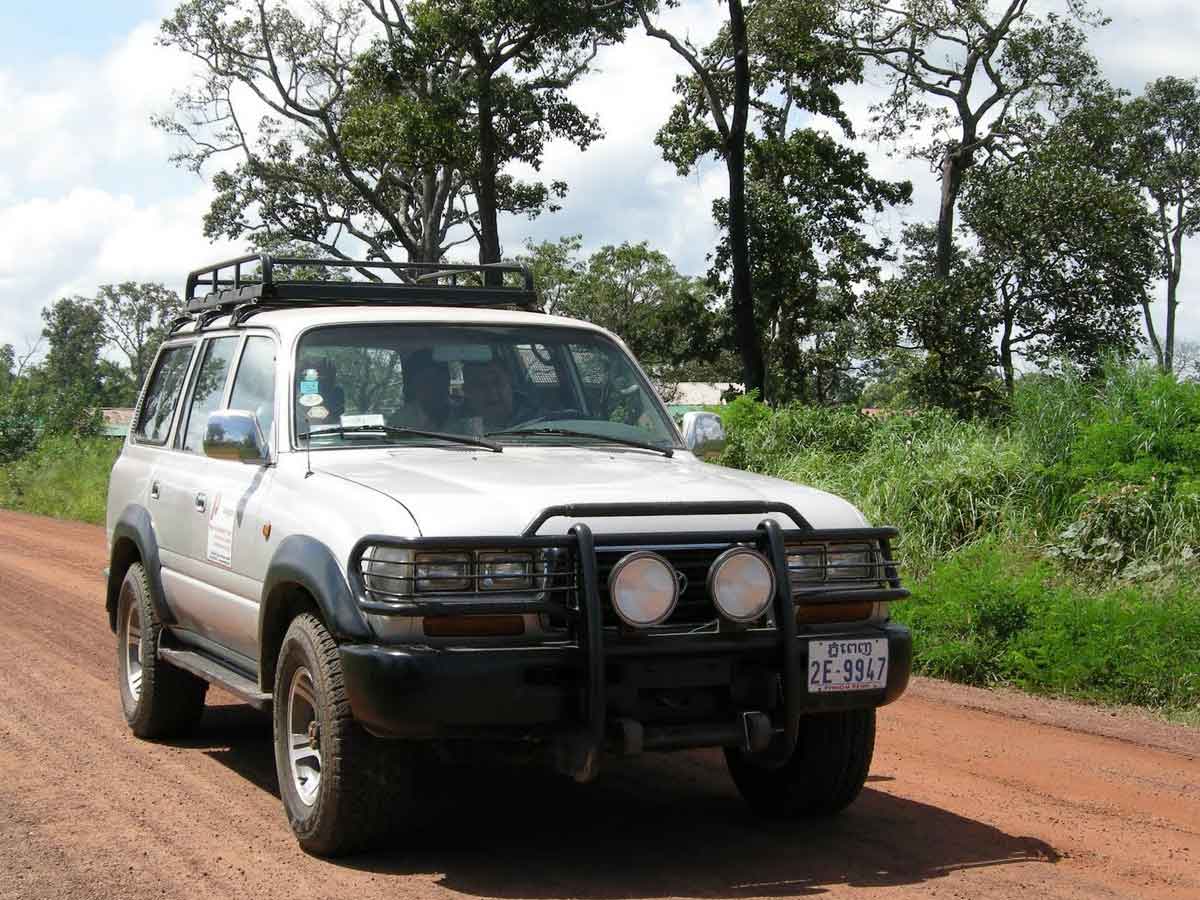 I remember the vehicle well, it was a beast of a car - ex United Nations from the UNTAC days when the UN were peacekeeping in Cambodia.

We took some essential supplies with us for the troops. Ta knew what they’d  appreciate and so, we loaded up with cases of beer - always good for fighting on.

Well it was a helluva day up there - an amazing temple and super friendly troops. Well, certainly more friendly when we cracked open the beers. 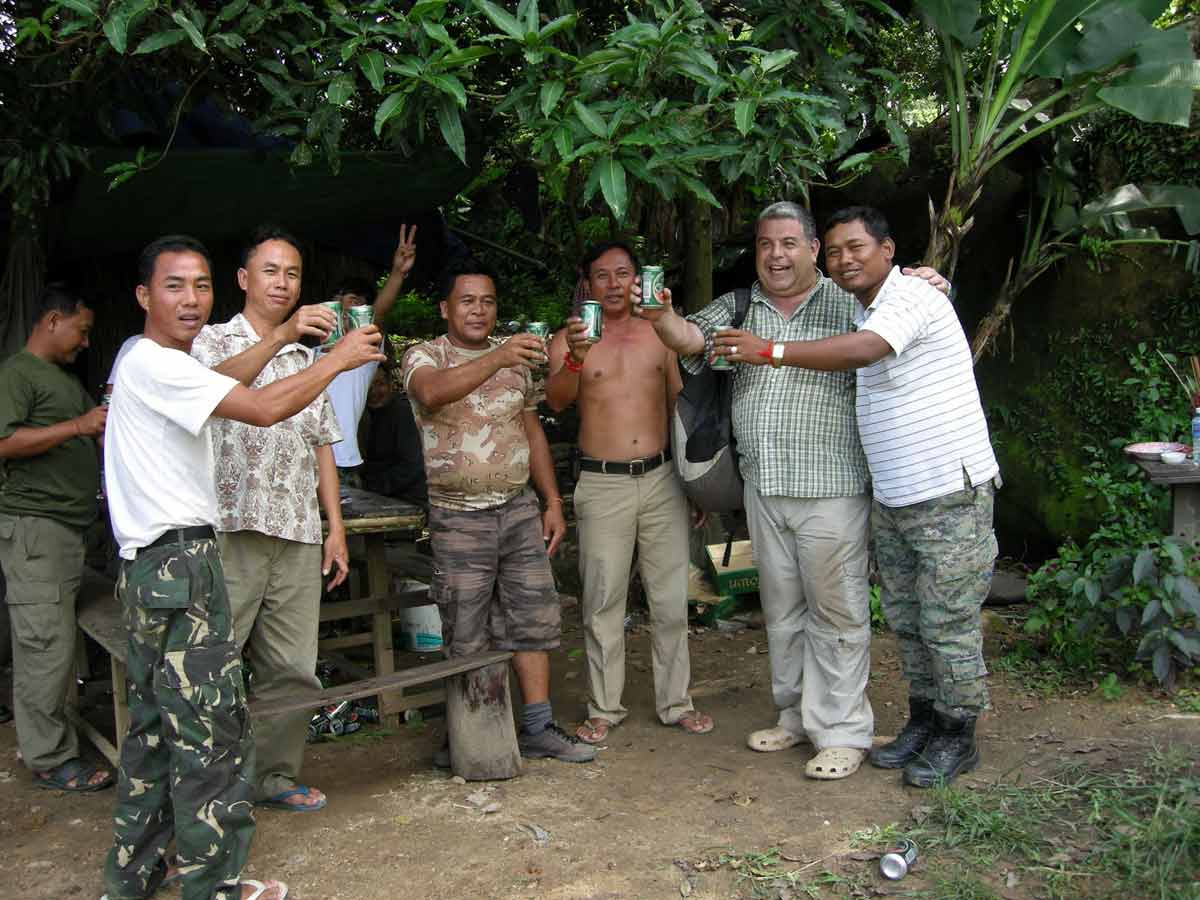 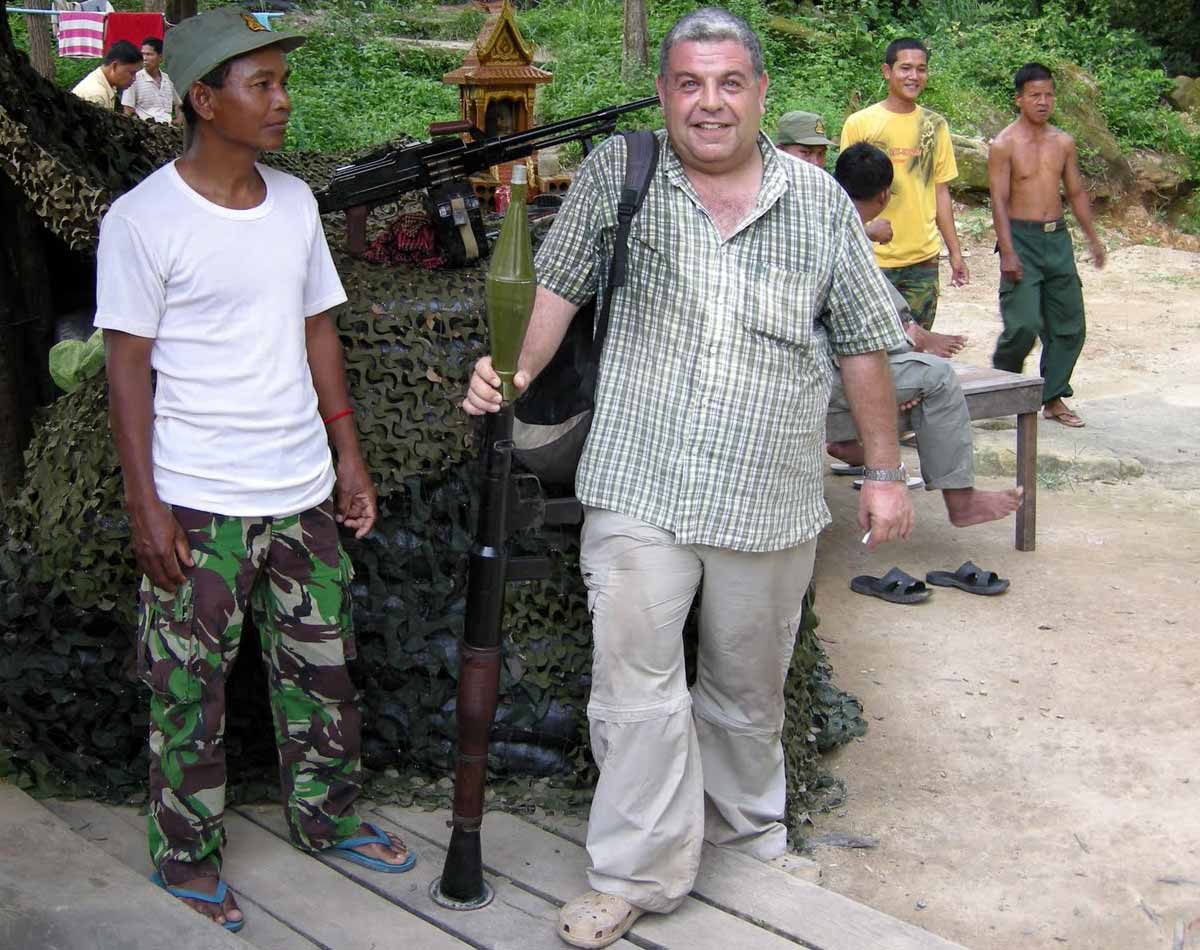 I so much wanted to fire one RPG (Rocket-propelled Grenade) across to the Thai side, just to see what would happen.

Alas, the peacekeepers wouldn't let me - no sense of adventure!

What I didn't know - and couldn't believe, was that many of the troops had their families with them on the front line - wives and kids. The army didn't get fed much by the government.

It was heartbreaking to see kids running around and playing amongst the stockpiles of munitions. This is one of the most emotive pictures I've ever taken.

A fitting way to end this little story. 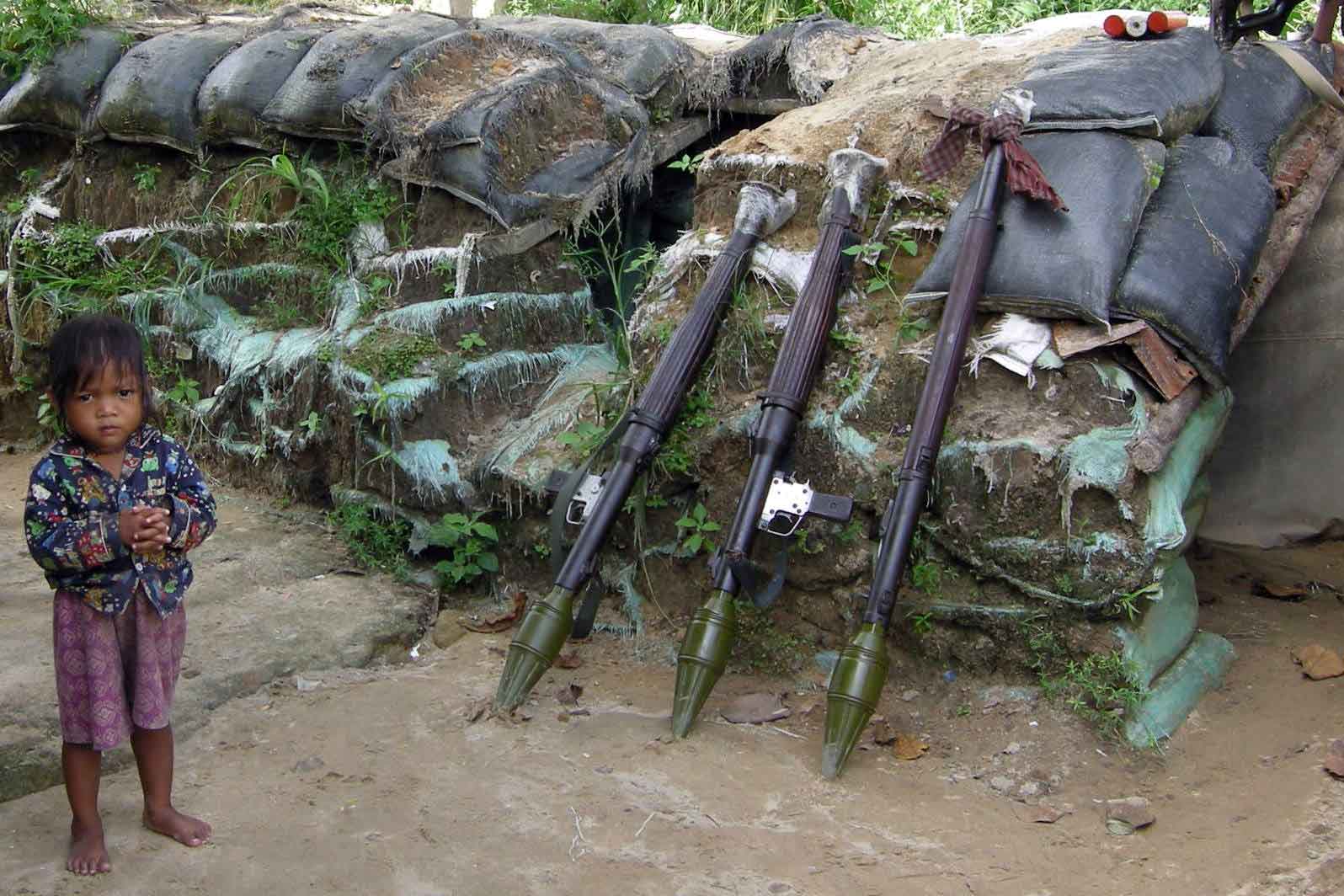