It’s been a relatively hectic couple of weeks, and I’d been getting around to updating my blog, but well, I’ve been too busy enjoying myself.

We recently had a meetup of four generations of the Garber clan, from baby Miller (10 months) to Great Grams at four-score and and bit more 😉 Also, if I wasn’t feeling ill enough – I had the urge to go see a match at Old Trafford and my beloved team of mis-fits – Manchester United.

Brother Mike managed to get 3 tickets, so me, he and my lad Alex had a splendid boys-day (and night) of beers, burgers, footy and then more beers!

And this is because a couple of weeks ago I received my latest CT scan results, which like the curate’s egg, is partly okay and the other bit not so.

The good bit is Tom, Dick and Harry are just about still behaving themselves, in that since they had that good zapping with radiotherapy back in December – they’re still not yet back to their pre-treatment sizes.

The not so good is because the scan report states ‘there are multiple tiny nodules in the left lung which are suspicious’. Typical understatement – really meaning that it’s looking like the beginnings of spread to my other lung.

So that also meant re-discussing my treatment plans and a big decision that went with it.

In my last blog post, I was trying to choose between entering a trial program with some shiny new drugs to test on me (and others), or immunotherapy under the care of Dr Wozzer at my local oncology unit in Cheltenham.

But now, considering what appears to be the onset of further spread, chemotherapy will be the first-line drugs treatment. This in itself isn’t straightforward for me, because the ‘go-to’ treatment would have been Cisplatin, but there were (and still are) concerns that my kidneys would be damaged by that treatment.

So, quite fittingly for Wozzer– I’m having a cocktail of two chemo drugs: Carboplatin, which is less toxic than Cisplatin, hopefully with reduced side-effects and Fluorouracil (5-FU), which I think is going to do most of the heavy lifting in attacking the cancer cells.

If we remember back to a previous post when I touched on how cancer cells uncontrollably divide and create serious problems in the body, well, chemotherapy disrupts this cell-division and generally shrinks tumours or at least slows down their development.

Unfortunately, chemo drugs in general can’t just target cancerous cells. Other fast-dividing cells in the body, such as hair follicle cells (leading to hair thinning or loss), cells that line our stomach and bowels; (leading to sickness and diarrhoea); or blood cells (leading to tiredness and bleeding from almost anywhere) are also attacked by chemotherapy – so this is what causes the well-known side-effects that we see or hear about.

Of course, there’s a long, long list of side-effects and it appears that every single patient reacts differently. But it seems for my case that the three listed are the main ones to watch.

How they get the chemo drugs into me and for how long I’ll be on chemo? Well, that’s a longish answer and worthy of its own blog post.

Which is my way of saying I’ll do my best to write that up in a day or so! Until then, I’ll keep on with the beerotherapy 😊

So, it was agreed that because of the tumour progression, the return of back pain caused by the tumours and the signs of spread to my other lung, that Chemotherapy would be better as a first-line treatment and likely to show faster-acting relief than immunotherapy. For now, at least.

Believe it or not, this isn’t as scientific as we’d think. The decision is down to each individual patient in how they feel, disease progression and to a degree their own choice – after discussion all the options with the professionals.

Once the decision was made, as ever here in Gloucestershire – the NHS were very quick to swing into action and book all my pre-treatment and prep appointments. This included a thorough Q&A session with a chemotherapy nurse, blood tests and the insertion of a PICC line (peripherally inserted central catheter) 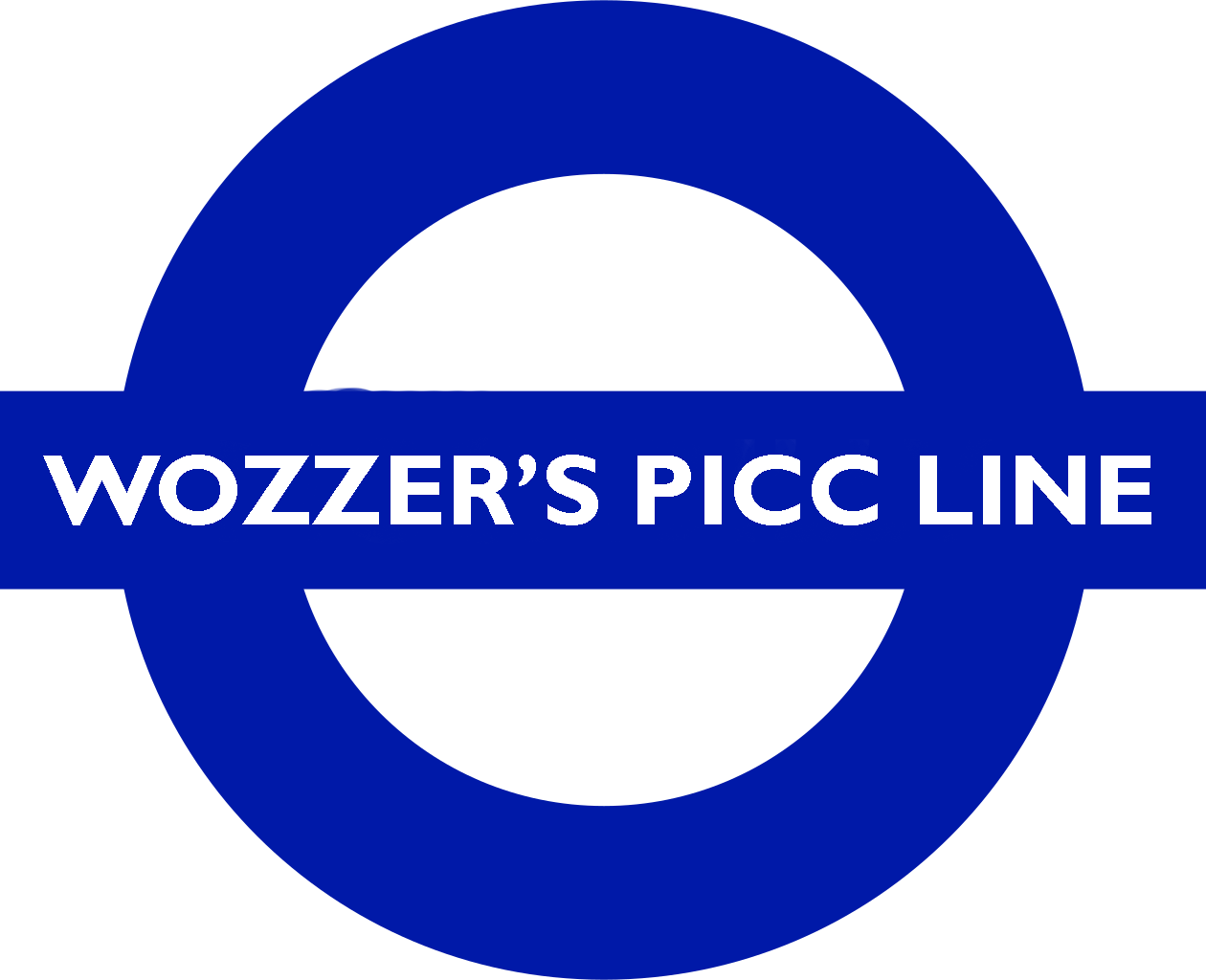 Because I’ll have a number of chemo infusions, it’s better to have a semi-permanent very thin tube inserted into my upper arm, and around 500mm through my veins to a position near my heart. Once in it can stay in for a few months and receive medications and also be used for blood sampling etc – all without the use of needles. Perfect for me!

I had to admit to a bit of trepidation as I was told this is done with a local anaesthetic and awake, while watching progress of the tube through my body on an ultrasound scan monitor.

Pretty amazing is all I can say! The PICC team were very efficient and the whole procedure was over in around 25 minutes. Apart from a slight feel as the Lidocaine anaesthetic was injected, I never experienced any pain.

Big thanks to Lauren for a very professional, calming, and quick procedure x

Well, I’m all set to begin the first of my planned 18 weeks of chemotherapy. This is administered in 6 x three-week ‘cycles’.

Each cycle will comprise a one-time infusion of Carboplatin, followed by four days of Fluoroacil 5FU chemo at home, which is delivered by a small pump (which I must wear 24/7), at a rate of 2ml/hour for 96 hours.

This pump has a tube which is connected to my PICC line and I have to eat, sleep and shower (somehow) with this whole contraption in place. At the end of each cycle week – a district nurse will disconnect the pump, flush out my PICC line and re-dress the line entry point in my arm.

Then it all starts again three weeks later!

I’ve just completed / survived my first week on the chemo cocktail, so perhaps a good time to reflect on how things have played out so far.

Starting a new line of cancer treatment gives rise to trepidation and uncertainty – it’s a fear of the unknown. Doesn’t matter how much I research the side-effects, it’s clear that even identical treatments on patients, generally produce widely different outcomes. So just got to deal with it as it comes, I suppose.

Monday 9th May was a lovely sunny morning as I walked into Cheltenham Oncology Centre. Very much the same as when I started radiotherapy almost exactly 2 years previously, as a cancer ‘newbie’.

But now the centre is very familiar –many of the staff know and greet me – but in that special way that they have of being welcoming, although not particularly happy to see me in there again.

I’m an hour early for my appointment in the chemo ward. No point to sit waiting at home, I’d rather wait in the unit and hope they can get me in early. Which they do.

A hospital volunteer greets me and leads me to the chemo unit and my ‘reserved’ chair. There are six chairs in my section and most are occupied.

My allocated nurse – Kat introduces herself and goes through the double (and it seems triple) checks just so there’s no mix-up in treatments to the wrong patient.

I’ve really dropped lucky with Kat. She’s super-efficient, but also wonderfully funny – and I can tell by her interactions with other patients, this is not an act. I think it’s marvellous how nurses can work on this type of unit, knowing what they know – and yet remain remarkably upbeat to ensure the patients have a relaxed time there.

Kat sees my PICC line ‘ooh – lovely’ she says. ‘I can do all sorts with this.

Lovely for me too, I have hopeless veins for needles and cannulas.

Kat hooks me up to a saline drip – get some fluid in me to begin. 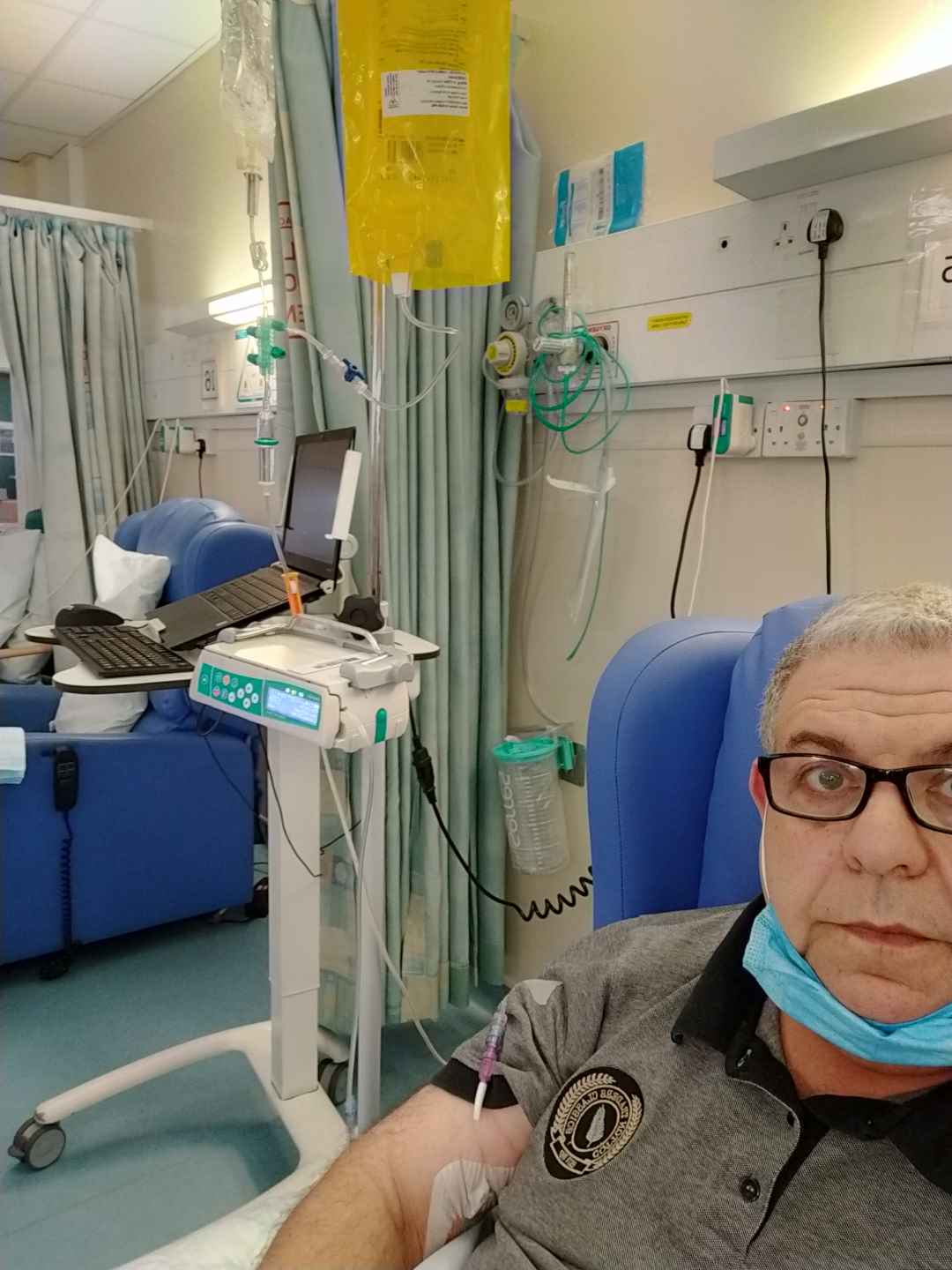 This is followed up by a good shot of Dexamethasone, which is a steroid. It’s used for many treatments, but in my case to help the body transition with the chemotherapy drugs. After that I get a dose of an anti-sickness medication and then finally hooked up to the Carboplatin chemo. This infusion takes around an hour. Kat puts it all together and places the Infusor into a small ‘bum bag’, which attaches to my belt. That’s me and the Infusor ‘married’ for a few days. I can’t disconnect it and must get used to it being there – including while sleeping, without of course, allowing the line to become tangled or disconnected. It’s pretty amazing how we adapt to new things. In 60 odd years, I’ve never slept on my back – but immediately I find that wedging the Infuser behind my pillows, gives me enough play in the line that I can (almost) sleep comfortably.

Showering isn’t easy – I have a waterproof sleeve to cover the PICC line and then protect the Infuser pump by placing it in a plastic bag and then tied to my wrist. Kinda works though!

And that’s it really – my first week on chemo hasn’t been so bad, all things considered.

I’m feeling fatigue – but that’s easily overcome by having a lay down. I’m well experienced in this anyway. Hopefully it’ll stay this way and we’ll see how my second cycle goes in early June.

In the meantime, I'll be thinking how to best re-brand the 5FU Fluorouracil, to someing more catchy and memorable.

How about FU2 chemo?