I meet my next specialist – and I guess who will become the most important person for me for a while. I’m now firmly under the care and attention of the Oncologist who will be leading the team taking care of me. Although at that time I didn’t realise what an amazing team it is.

Another Wozzer I thought, that’s an amazing great omen 🙂 I’m sure he felt the same about his new patient…

He has the confident but calming style of confirming what is what. ‘You know you have throat cancer Warren, and the good news is there’s no spread away from the throat. There were some patches seen on a lung but the MRI scan confirmed they are nothing to worry about – although nothing will be left to chance and we’ll keep an eye on that going forward’.

And so, it’s down to work. No messing or waffling. The treatment is fairly aggressive he says – six weeks of radiotherapy x 5 days a week and additionally two cycles of chemotherapy on weeks 1 and 4.

Honestly that left me reeling a bit. I was expecting radio only and had already researched some that reckon it’s enough on its own.
There’s good reason though. He continues… ‘This particular type of cancer has a good possibility of eradication, with a human survival rate of around 75% after 5 years. Of course I’ll take that – and try and increase the percentage.

The explainer below is courtesy of Cancer Research UK

TNM stands for Tumour, Node, Metastasis. This system describes the size of the initial cancer (the primary tumour), whether the cancer has spread to the lymph nodes, and whether it has spread to a different part of the body (metastasised). The system uses letters and numbers to describe the cancer:

From this it’s clear the cancer has been developing for a while (T3), but it’s never given me any indication, save the mild sore throat on and off over a couple of months. The main thing Vicki advised me later is M0 means no spread to other areas of the body.

Dr Grant continues… ‘We’ll being treatment in around 3 weeks, say mid-June and finish at the end of July. On average expect the treatment to intensify as it progresses and then some months of discomfort, but hopefully feeling better towards the autumn time’.

Before treatment begins, there’s more to be done and more of the team assigned to me, make initial contact:

Just amazing – and I don’t know half of it yet, except this Gloucestershire NHS Foundation Trust is an extremely well-oiled Rolls Royce of a machine. Every single person I’ve been in contact with – or staff that have phoned me are not just professional, but very personable – without exception.

It’s easy to say this, but I really mean it that I’m feeling pretty good about my condition – because I have total faith in this highly experienced team, who seem to give me the impression that I’m their only patient 🙂

And lets not forget we’re in the middle of a pandemic, causing the UK’s greatest ever drain on NHS resources right now.

And it's true. I’ve learned a new word: Scanxiety - which describes ‘the apprehension felt by people with cancer as they wait for their next scan’. 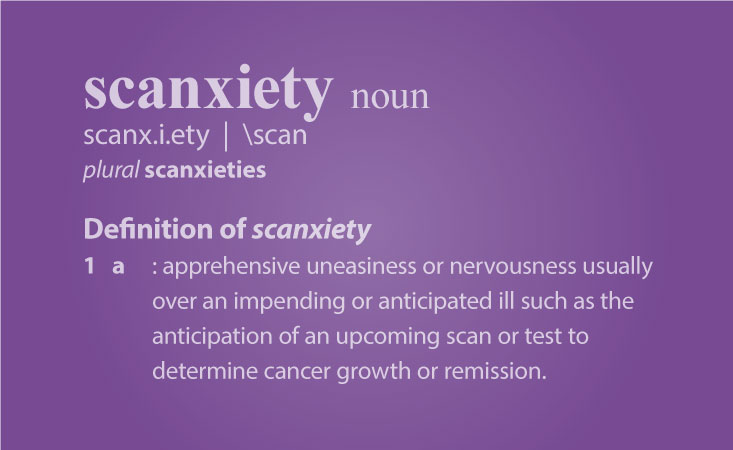 This came about by doing too much of what I shouldn’t - which is hunting around the interweb trying to find information, about things of which only give me an incomplete picture as to what's likely to happen.

Let me back up a bit. My first full scan, post treatment was done last September – and that was a very anxious wait to find out the results.

Good and bad was the outcome of that scan. Good that the throat tumour has diminished – bad that metastatic (secondary cancer) tumours had been found in a couple of locations.

They weren’t deemed ready for treatment then, but another scan was scheduled for January 2021 to see if there’s any further development.

No matter that I try and not worry about what I can’t influence, but waiting for that next scan and the outcome, is never ever far from my thoughts. Every day.

That is definitely Scanxiety.

And so I was ever so glad to have my January PET/CT scan and the subsequent appointment to discuss the results. The scan indicates a third tumour showing in my right lung and the original two in the same lung are still developing.

It wasn’t a great shock and I’m now back under the care of my oncologist – the excellent Dr Warren Grant. He phoned me the other day to get my thoughts and to update me on his thinking.

As ever with me, it’s not yet clear-cut. I will be starting treatment again, but right now it’s not definite when, or with what. By this I mean the choice will be either Chemotherapy or the much newer Immunotherapy treatment.

This is another new word for me. Immunotherapy ' which uses substances to stimulate my own body immune system to fight the cancer'. I suppose it's too much to wish these will be ganja-type substances, but one can hope - eh?

The decision depends partly on whether my cancer would be receptive to Immunotherapy and also on the overall effect of how my body will respond to either of the drugs.

That – and the schedule for treatment will become clearer on my next appointment with Dr Grant in mid-February.

But for now, I’ll end on a lighter note because I just received my first Covid vaccination jab. I’m in ‘group 4’ because of my condition and treatments. 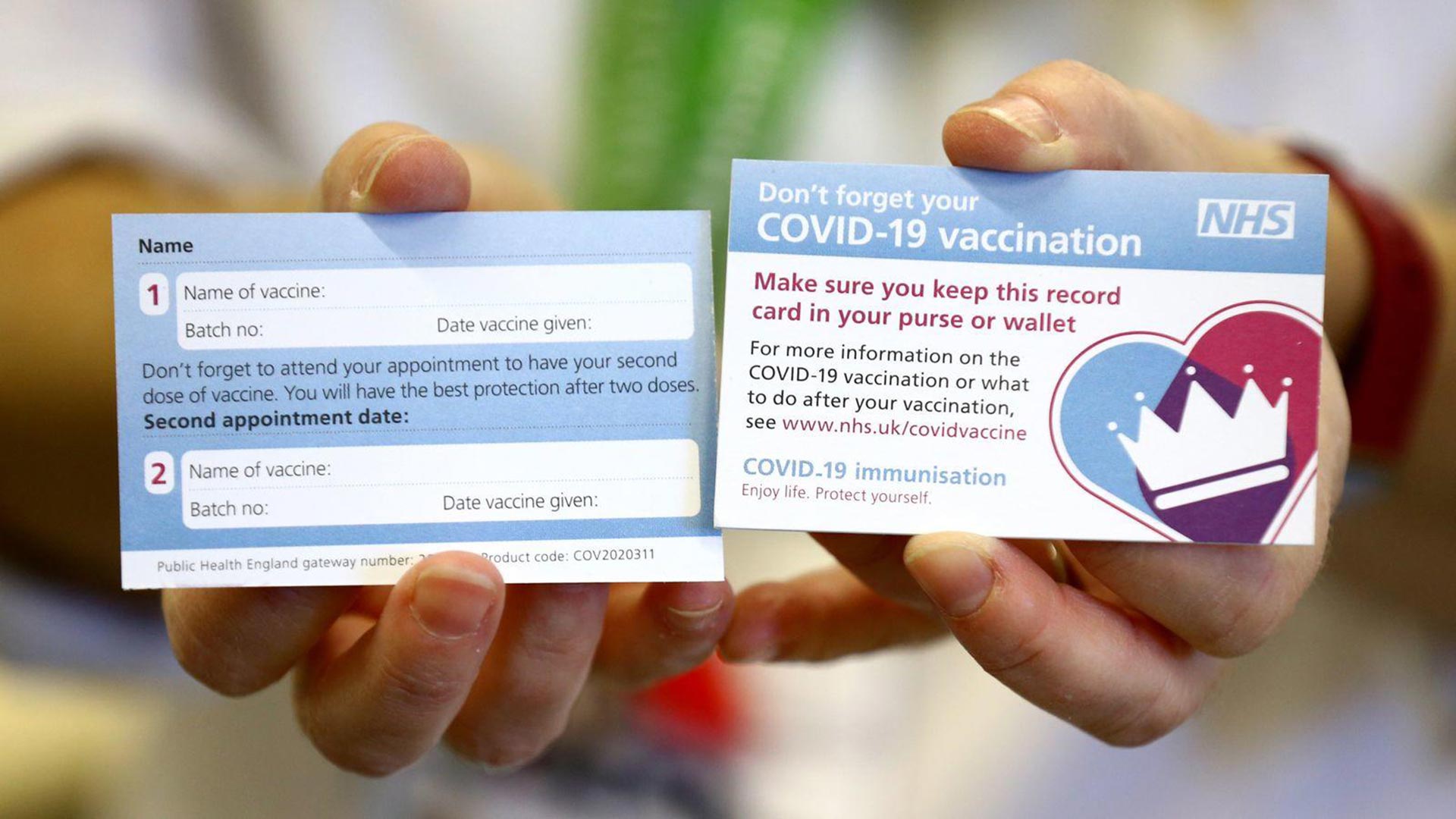 No surprise that Gloucestershire NHS have it well sorted. Very quick and slick at the vaccination centre and no pain either.

Although I’m sure I heard the nurse whisper under her breath that I’d just feel a little prick.

Not a new experience for Wozzer… 😊

Well, it was always coming, but a bit of a shock just the same. I’ve had a nagging pain in my back for a good couple of months or so. Not a lower back muscular pain and certainly not a sports injury!

I flagged this up at my recent meeting with my Oncologist – the ever-professional Dr Warren Grant. He did say that secondary tumours in the lung sometimes show few symptoms and for those that do, a low ‘nagging’ pain is not uncommon.

So, definitely time for a new CT scan to see what’s developed since my previous scan back in May, when the tumours were still relatively small.

The results of the scan came back last week and yep, it was a bit of a shock – to me, at least.

I say ‘to me’ because Dr Wozzer indicated that these sizes are not too bad, when considering the overall size of a lung.

Anyway, he decided that now is a good time to begin treatments. The plan is for some ‘palliative radiotherapy’ now and most likely to follow with some cycles of chemotherapy in the new year.

So a couple of days, ago I was back to the Oncology Centre in Cheltenham, for a pre-treatment scan and some body mark-up.

Felt a bit strange (and disappointing) to be walking back in there nearly 18 months after the throat radiotherapy.

In another respect, a feeling of familiarity: The same receptionist greeted me with a ‘Hi Warren’ - obviously remembering me (or at least remembering the tin of biscuits I left back then).

And the radiologist doing the prep work was the ever-friendly William – who is always bright and cheerful and became a good ‘mate’ during the hard weeks of treatment back in May / June 2020.

Will took me through the procedure which was a quick scan to see the tumour locations and then a tiny ink tattoo on my chest, which defines the ‘reference point’ that will be used when aiming the radiation treatment.

I’ve known all year this treatment was coming – and I’m ever so glad that Dr Grant held off until mow. It’s allowed me a good summer and autumn to get around and see family and friends.

Equally I’m now relieved that treatment is commencing. Larry the Lump was well beaten – and remains so.

I also know that Larry's sons - Tommy the Tumour, Dick and Harry have been gearing up all year for a fight and I’ll be taking them on next week, with the first bout of palliative radiotherapy.

I'm scheduled for five treatments (known as 'fractions') on w/c 6th December.
More from me soon after x