My thanks to everyone that joined-in on Zoom video throughout the almost 13 hours that I was online. And to all of you that kindly donated... Well, you contributed towards a total donation of 1300 GBP / 1675 USD.

To put this in perspective, this would pay for a Macmillan Support Worker, helping people with cancer for almost 2 weeks. I've been a direct beneficiary of this support, so I'm humbled at the response from you all.

On the day, I started at 7am here in the UK and soon enough has some past work colleagues (also great friends) now living in New Zealand. Soon enough Australian friends were on line - followed by Asia, Europe and finally the USA. There were 28 people (well more including couples) from 10 countries. Some I hadn't seen since perhaps 2010, when in Cambodia. Some were more recent friends, including some of my Macmillan team - thanks Sarah and Olly for dropping by!

It was truly heart-warming to not only catch up again, but to know everyone took the time and trouble to join me and reminisce.

I must make a special mention to Dally in the Philippines, who had the unknowing misfortune to buy a ticket on the Mekong Express overland coach from Saigon to Siem Reap. A journey that takes around 14 hours. That in itself is bad enough, but finding that Wozzer was in the next seat for the whole trip...

And so the day went on and I loved it all. I really can’t thank everyone enough.

Draw for the Macmillan Coffee Mug

I screen recorded the draw, using a list of unique participants (as reported by Zoom), each with a number and an online random number generator. You can see how I did it (for transparency and fairness) in this short video.

I wish you could have all won – all are equally deserving. But one winner only for the jackpot, which goes to Phil Butterworth, now living in the USA. As it happens, Phil was (is) a great mate from our Cambodia days. He’s a helicopter pilot, used to do sightseeing flights and also some pretty cool commercial stuff too. I distinctly remember him flying with university professors to discover (and map) a completely hidden ancient city.

I had many nights out with Phil, including one outstanding Haloween / fancy dress pub-crawl around the Old Market (Psar Chaa) area in 2010.

We knocked ideas around on one of our many man-dates, over beers and a curry. He thought I’d make a pretty good Shrek and I thought he’d make a very good policeman – and so it came to pass…

Man oh man, what a night. I had literally hundreds of tourists wanting to pose with me – mostly Korean as I remember. This allowed me to get into full character – complete with a dodgy Mike Myers Scots accent… “What’s up with you? Have ye never seen an fookin ogre on a Saturday nite in Siem Reap’??

They had no idea what I was on about 🙂 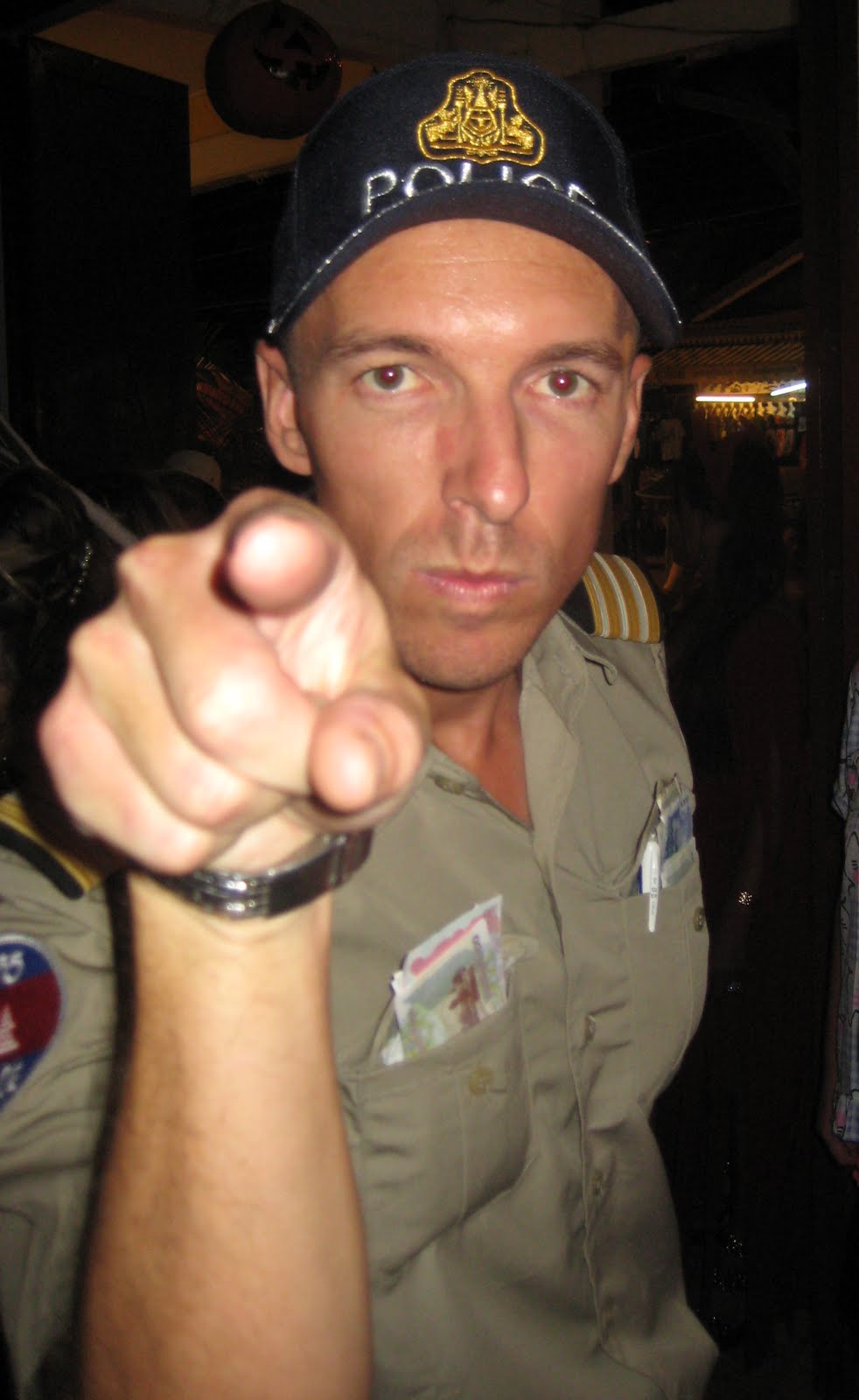 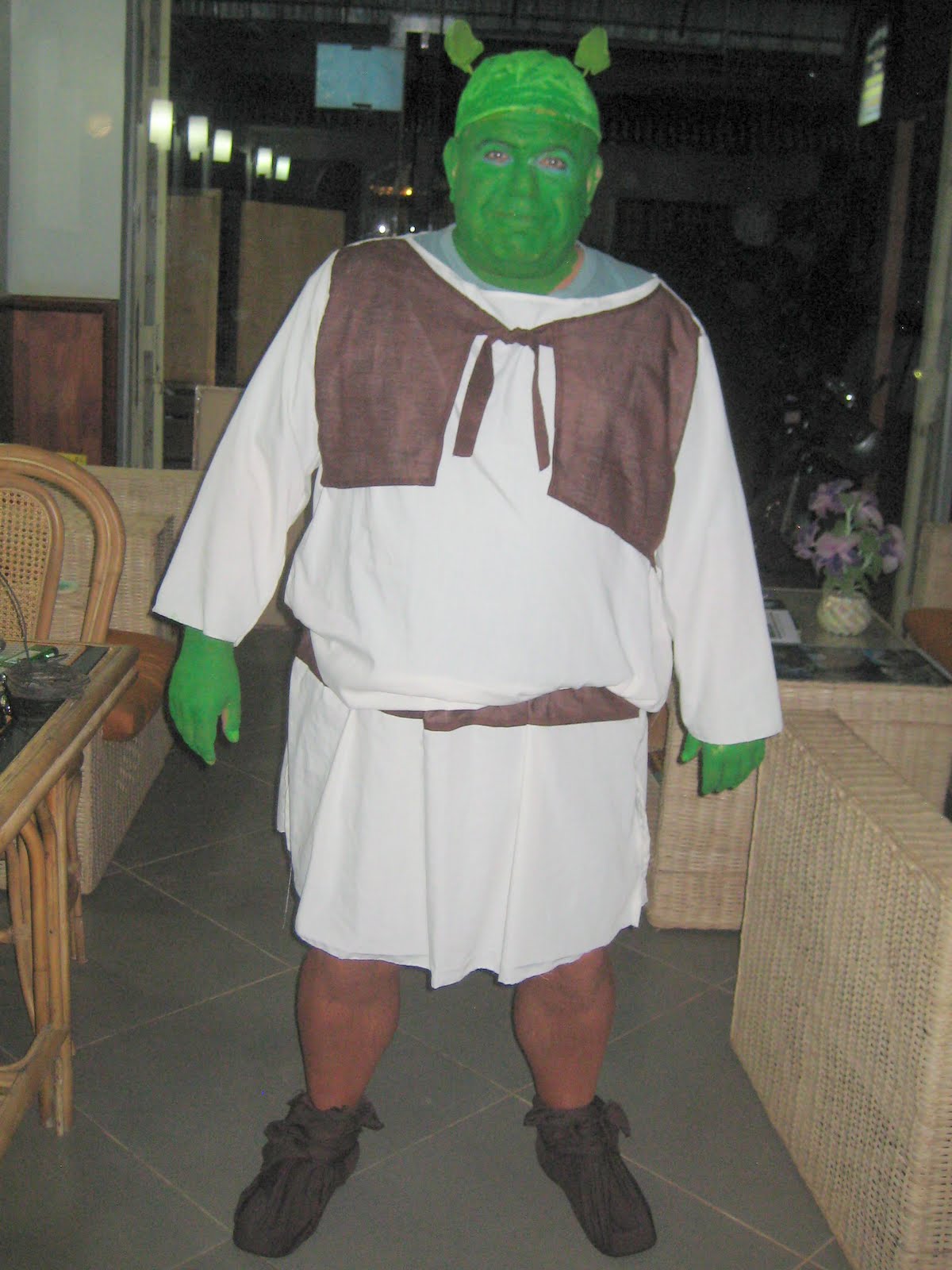 Phil also really went to the limit. Well, past it really. He obtained a full, real police uniform and stuffed all the pockets with banknotes - imitating in real-life the local corruption that goes on.

It was a real hoot - until the real police carted him off. I was terrified that they'd lock him up and forget about him (as they were prone to do in those days). As it was they relieved him of his uniform - and all his money, and he was back with us within an hour or so. Scary though !!

Next week (6th October), I have my appointment to discuss the results of the PET/CT scan that was done a couple of weeks ago. Watch out for my next blog update a few days after.

Until then - take care.

Well, I suppose I did know this day was coming – but didn’t know exactly when. But I can now reveal that Miss Peggy the PEG and Big Wozzer were today divorced at Cheltenham General Hospital. The separation ceremony was performed brilliantly by the ever lovely and professional Vicky, my Macmillan Specialist Nurse.

It was an emotional morning. Miss Peggy has been with me since mid-April, some 7 months and we’ve been very attached – quite literally. She always knew the way to my heart was through my stomach.

During my darkest days post-radiotherapy during June and July, she kept me alive as this was the only way I could take any water, drugs, or nutrition.

Sure, in more recent weeks my dependence on tube-feeding has diminished, while I attempt to improve eating and drinking by mouth. That’s not perfect by any means and I still have to be quite careful in my choice of food and drinks.

When I say choice of food I, along with most that are recovering from throat cancers, find moist and soft foods are easier to swallow. Saying that, almost every bit of food must be accompanied by a sip of water or whatever, because the lack of saliva makes things difficult -to say the least. It is improving by fractions each week, but could be many months or years, or never - to be back as before. A small price to pay in the big picture – but also a constant reminder of my condition.

Anyway, I don’t have Miss Peggy to fall back on anymore, so it has to be onward and upwards with solids now!

And just for completeness – for those that want to know, the PEG removal was fortunately very quick and painless – except for a couple of seconds as the extraction through my stomach wall and skin, caused me to wince.

The PEG tube has been held in place by a ‘balloon’ or ‘mushroom catheter’ and an internal ‘retaining disc’ which stops it being pulled through.

There’s a very thin wire inside the feeding tube and for the removal procedure, the wire is pushed into the balloon, which deflates it and then it just requires a sharp tug to pull the tube to the outside – the flexible retaining disc being the bit that causes the sharp, but momentary pain.

Here’s a diagram which roughly illustrates my description.

And CLICK HERE if you really want to see the real Miss Peggy as just removed.

So that’s about all to report for the moment. My secondary tumors are not causing me any pain or distress – except for knowing they are there, so to speak.

As written previously, I’ll know more hopefully sometime in January when I expect to have another scan and results. In between of that, I’ll have a meeting with my care team in December and will write a quick update post in around a month from now.

Until then, thanks for following me on here or Facebook and for your kind notes and comments. I do really appreciate it