Well, I suppose I did know this day was coming – but didn’t know exactly when. But I can now reveal that Miss Peggy the PEG and Big Wozzer were today divorced at Cheltenham General Hospital. The separation ceremony was performed brilliantly by the ever lovely and professional Vicky, my Macmillan Specialist Nurse.

It was an emotional morning. Miss Peggy has been with me since mid-April, some 7 months and we’ve been very attached – quite literally. She always knew the way to my heart was through my stomach.

During my darkest days post-radiotherapy during June and July, she kept me alive as this was the only way I could take any water, drugs, or nutrition.

Sure, in more recent weeks my dependence on tube-feeding has diminished, while I attempt to improve eating and drinking by mouth. That’s not perfect by any means and I still have to be quite careful in my choice of food and drinks.

When I say choice of food I, along with most that are recovering from throat cancers, find moist and soft foods are easier to swallow. Saying that, almost every bit of food must be accompanied by a sip of water or whatever, because the lack of saliva makes things difficult -to say the least. It is improving by fractions each week, but could be many months or years, or never - to be back as before. A small price to pay in the big picture – but also a constant reminder of my condition.

Anyway, I don’t have Miss Peggy to fall back on anymore, so it has to be onward and upwards with solids now!

And just for completeness – for those that want to know, the PEG removal was fortunately very quick and painless – except for a couple of seconds as the extraction through my stomach wall and skin, caused me to wince.

The PEG tube has been held in place by a ‘balloon’ or ‘mushroom catheter’ and an internal ‘retaining disc’ which stops it being pulled through.

There’s a very thin wire inside the feeding tube and for the removal procedure, the wire is pushed into the balloon, which deflates it and then it just requires a sharp tug to pull the tube to the outside – the flexible retaining disc being the bit that causes the sharp, but momentary pain.

Here’s a diagram which roughly illustrates my description.

And CLICK HERE if you really want to see the real Miss Peggy as just removed. 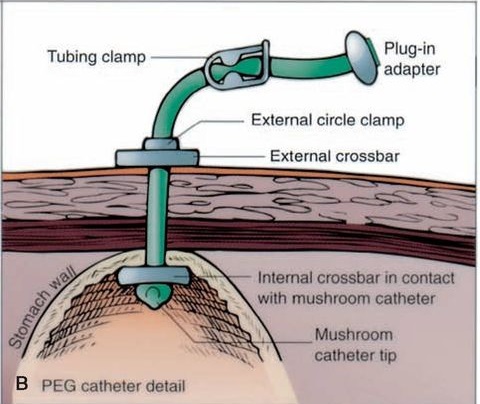 So that’s about all to report for the moment. My secondary tumors are not causing me any pain or distress – except for knowing they are there, so to speak.

As written previously, I’ll know more hopefully sometime in January when I expect to have another scan and results. In between of that, I’ll have a meeting with my care team in December and will write a quick update post in around a month from now.

Until then, thanks for following me on here or Facebook and for your kind notes and comments. I do really appreciate it